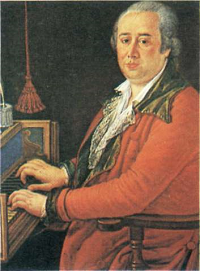 The instrumental output of Domenico Cimarosa (1749 - 1801) is not widely known, probably because of the scant information regarding this specific activity of his as a composer and, in the field of piano music, his only known legacy so far, is reflected in the existing 88 sonatas.

They are different sorts of compositions, brilliant or expressive with various types of formal structure, probably originally grouped together in pairs or threes, yet recognized at the time as individual pieces.

This body of work of 88 sonatas was recently edited and cataloged thanks to the work of the musicologist Andrea Cohen, whose numbering I have followed, duly indicated next to the sonatas selected.

The first major historical issue that has been raised is whether the sonatas by Cimarosa had harpsichord or fortepiano as their designated instrument, so to this end, I have chosen to provide the information I have at my disposal.

The collection, in two folders, manuscript but not autograph, which Felice Boghen (1869 - 1945), a piano teacher and librarian in the Institute of Music L. Cherubini in Florence, unearthed and who presented the news in July 1924 to the Director of the "Revue Musicale" Paris, Henri Prunières (1861 - 1942), display "per il fortepiano" [for fortepiano] in the heading.

Vincenzo Vitale (1908 - 1984), in the preface to his edition of 31 sonatas taken from the Florentine manuscript, reminds us that in the Musical Museum of the Conservatory of San Pietro a Majella in Naples there are two fortepianos that belonged to Domenico Cimarosa.

The problem of dating the sonatas intersects with this first issue. Vitale hypothesized that their composition can be dated back to around the year 1787, when Cimarosa was invited to Florence by the Leopold II Holy Roman Emperor, who was Grand Duke of Tuscany named (Peter) Leopold I of Tuscany from 1765 to 1790. It is interesting at this point to observe the presence of fortepianos crafted by Bartolomeo Cristofori (1655-1731) at the Florentine court.