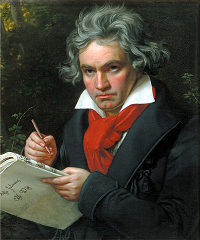 To consult different editions of this work go to:

This Sonatina in G Maj. Anh. 5 n. 1 is part of a group of two Sonatinas published in Hamburg in 1828 by the editor Böhme (Johann August Böhme 1766 - 1847), just one year after the composer's death. The authenticity of these Sonatinas is still considered doubtful, however, if verified, their composition can be traced back to the years dating between 1790 and 1792 concurrently with the Sonatina in F Maj. WoO 50 which presents the same formal division in two movements. This time collocation is not shared by some critics who date its possible composition around 1795.

CHARACTERISTICS OF THE PIECE

The first movement begins with the presentation of a thematic element followed by a brief alternative episode that ends with the resumption of the initial motif.  This whole second section is repeated, and  the task of ending the movement is finally entrusted to a coda:

The second movement is very similar to the first from a formal point of view,  the only difference being that the first thematic element is repeated:

The main task in playing such a simple and extremely well-known piece is to be able to render the sense of continuous phrasing with great elegance, as well as of highlighting the musical elements, taking care not to fall into the trap of overdoing the rhythm or exaggerating the expression.
Regardless of Beethoven's paternity of this piece, it is a composition that certainly belongs to the late XVIII century, not yet dislodged from the most consolidated musical formulas of eighteenth-century classicism and one that represents taste and grace.
Evident in the whole passage, but especially in the "Romanze", are the vocal and operatic derivation of the expressive formulas, both in the manner of the cadenzas and in the short recitative that prepares the second movement’s conclusion.
For this repertoire, sound quality is of fundamental importance so it is therefore appropriate to use these tracks to take careful note of musical detail and of the importance of the cantabile sound.